The ever-increasing area of paved surfacing in the rapidly expanding urban  communities results in a growing number of engineered stormwater structures,  which are designed to manage the runoff flowing from the roads and hard landscape areas. Water mixed with various pollutants from the impervious surfaces is removed by an underground storm system and does not infiltrate the subgrades. This results in three major problems:
• surges of runoff that increase erosion of the land
• growing pollution of rivers and lakes that collect the runoff
• reduction of natural infiltration into the subgrades that maintains levels of groundwater table.
Badly designed stormwater management is one of the key issues that  negatively impacts natural environment and results in its ecological degradation.

In urban developments, there is a large number of small rivers and their seemingly insignificant tributaries that are hidden underground and flow through the engineered storm systems. Eventually, the runoff is brought to the surface from the buried pipes, where it naturally meanders through the open land. The impact of the accumulated waste is the most visible at these locations. Natural and constructed wetlands absorb a large volume of pollutants dissolved in water, slow down the flows that result in the reduced peak of runoff and allow for water to infiltrate into the subgrades.

A natural wetland is a distinct ecosystem that is flooded by water, either permanently or seasonally, and provides a valuable habitat for wildlife. Therefore, these wetlands are protected by various legislation and cannot be used for bio-filtering polluted runoffs. However, constructed wetlands are artificially created and are primarily designed to treat sewage, grey-water, stormwater or industrial wastewater. LASquare has been involved in a number of projects where the creation of constructed wetlands was the main objective of the landscape design. These activities include:
• designing for bio-filtration systems that clean the water before it is collected in the storm sewers
• day-lighting of selected sections of existing underground storm lines or open, concrete-paved channels and converting them into constructed wetlands
• designing of detention ponds that slow down the peak flows after large rain events
• designing of trash catchment systems that capture litter flowing the in the stormwater
• reclamation of rivers and lakes that have been contaminated by urban or industrial runoff. 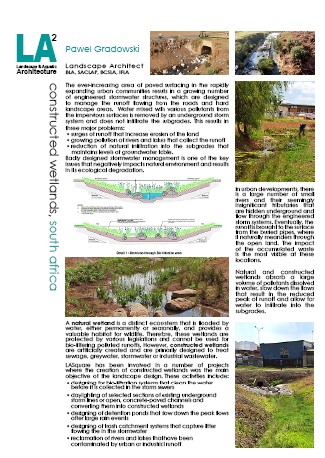 Boksburg Lake was man-made in the early 1900’s and over the years has run into significant problems with the substantial accumulation of organic sediments on the lake floor and with various types of water pollution.

LASquare, working in a team with Kamadi Consulting and SRK Engineering, developed a new masterplan for the rehabilitation of the lake. The proposed solution implements a variety of engineered and natural methods that will gradually remove the organic sedimentation, eliminate pollutants from the water, minimize future accumulation of organic and mineral deposits and restore a healthy ecological balance of the water that will improve conditions for wildlife in the lake and its perimeter. 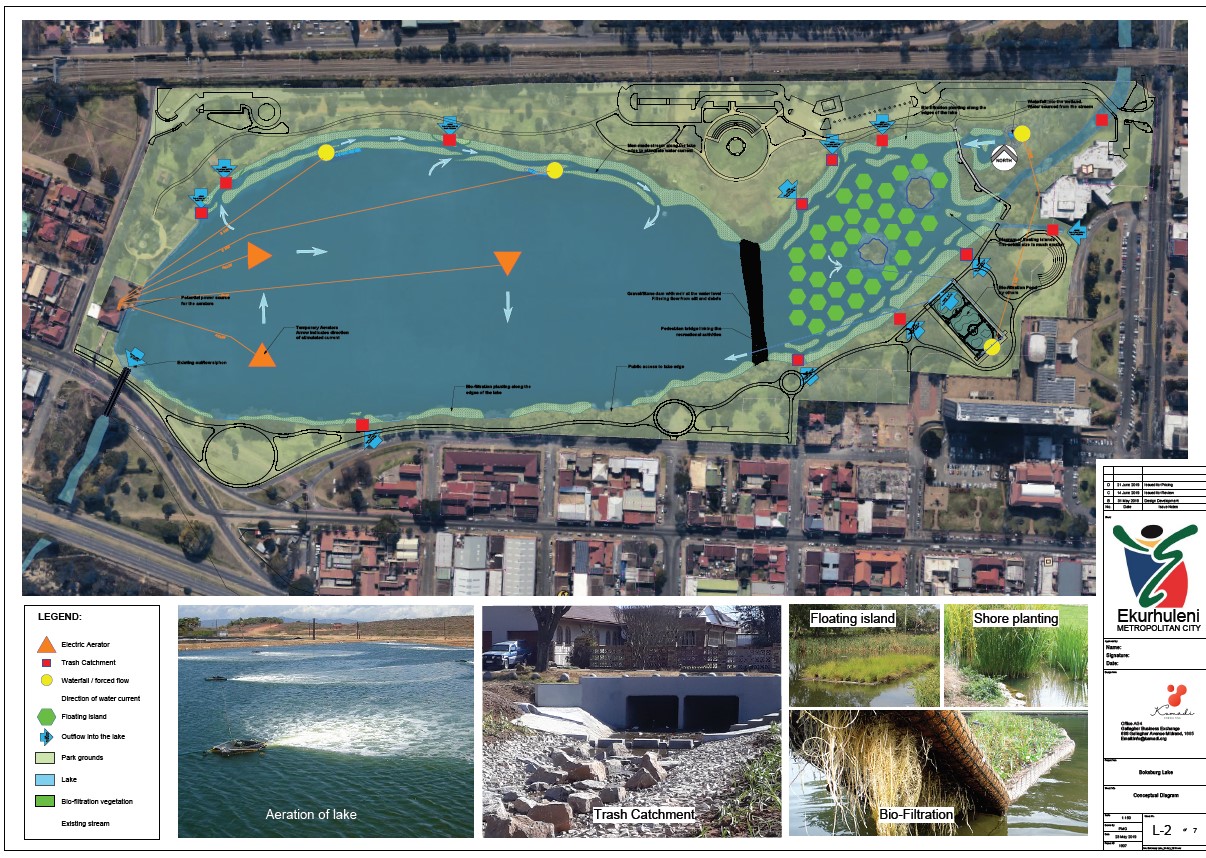 Water aerators installed on the lake surface will gradually oxidize its water and remove the majority of the organic sediment from its floor. A system of trash catchments installed at all storm drainage outflows will reduce future accumulation of waste.

An introduction of floating islands and the construction of planted islands along the lake perimeter allows for an increased bio-filtration process. A system of small pumps will force water circulation in the lake to ensure that all these interventions continue to improve the quality of whole body of water in the lake. 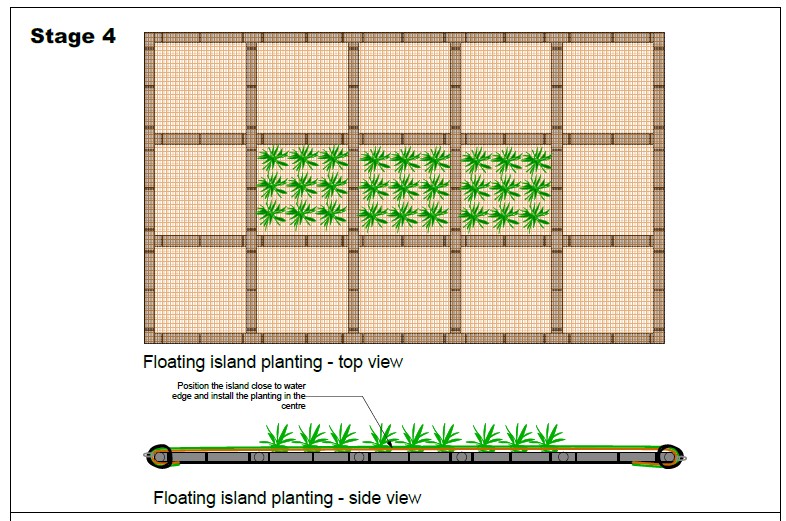 View of the existing Boksburg Lake 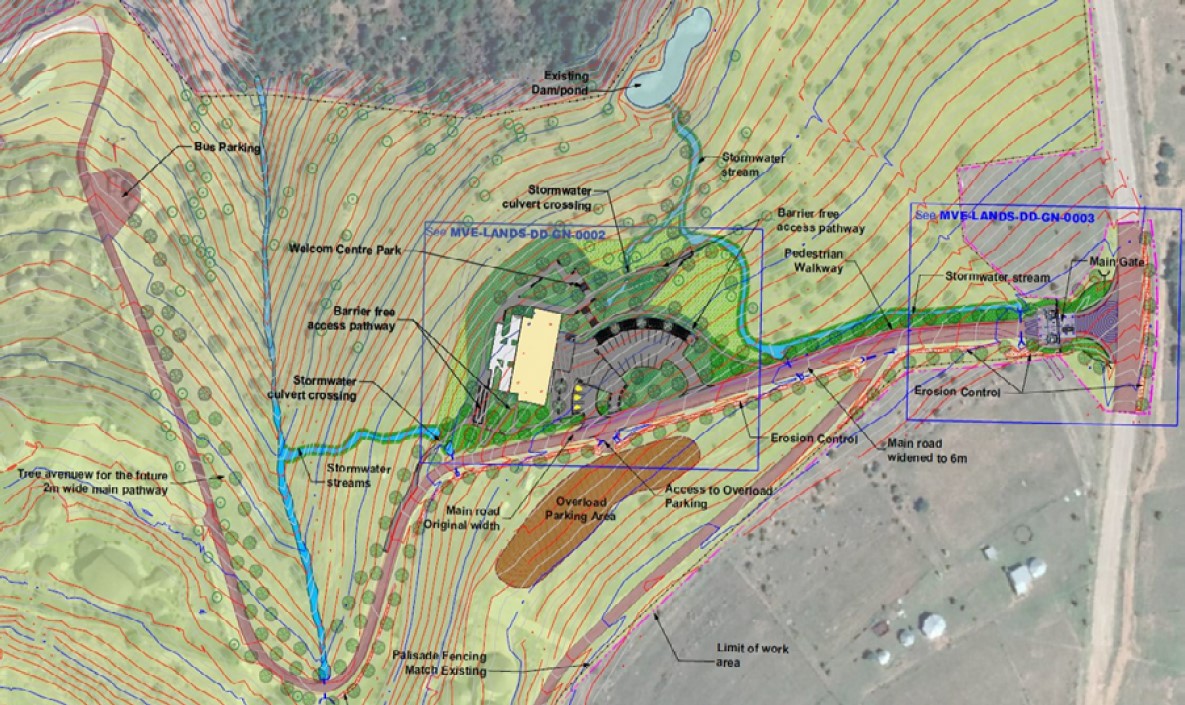 Mvezo is the birth place of Mandela. The existing museum and associated facilities needed modernizing and improvements to this World tourism destination.

Pawel Gradowski working in conjunction with Silverhorns Consulting and MVE Engineering was commissioned to develop a new masterplan that will incorporate:
• new entry gateways to the site
• new park adjacent to the existing Welcome Centre
• parking area for the visitors
• improvements to the storm water management infrastructure
• create a friendly setting for the visitors

Other critical objectives of the proposed solution had to:
• maximize job-creation for the local community
• protect and/or improving local environment
• maximize rainwater harvesting opportunities
• incorporate bio-filtration systems into the site drainage

Pawel Gradowski took the role of the leading landscape architect and provided the masterplan design for the entire site and the detailed construction drawings and specifications for the implementation of the Phase One area. The project completed its approval process in 2022 and is now awaiting the start of the construction phase. 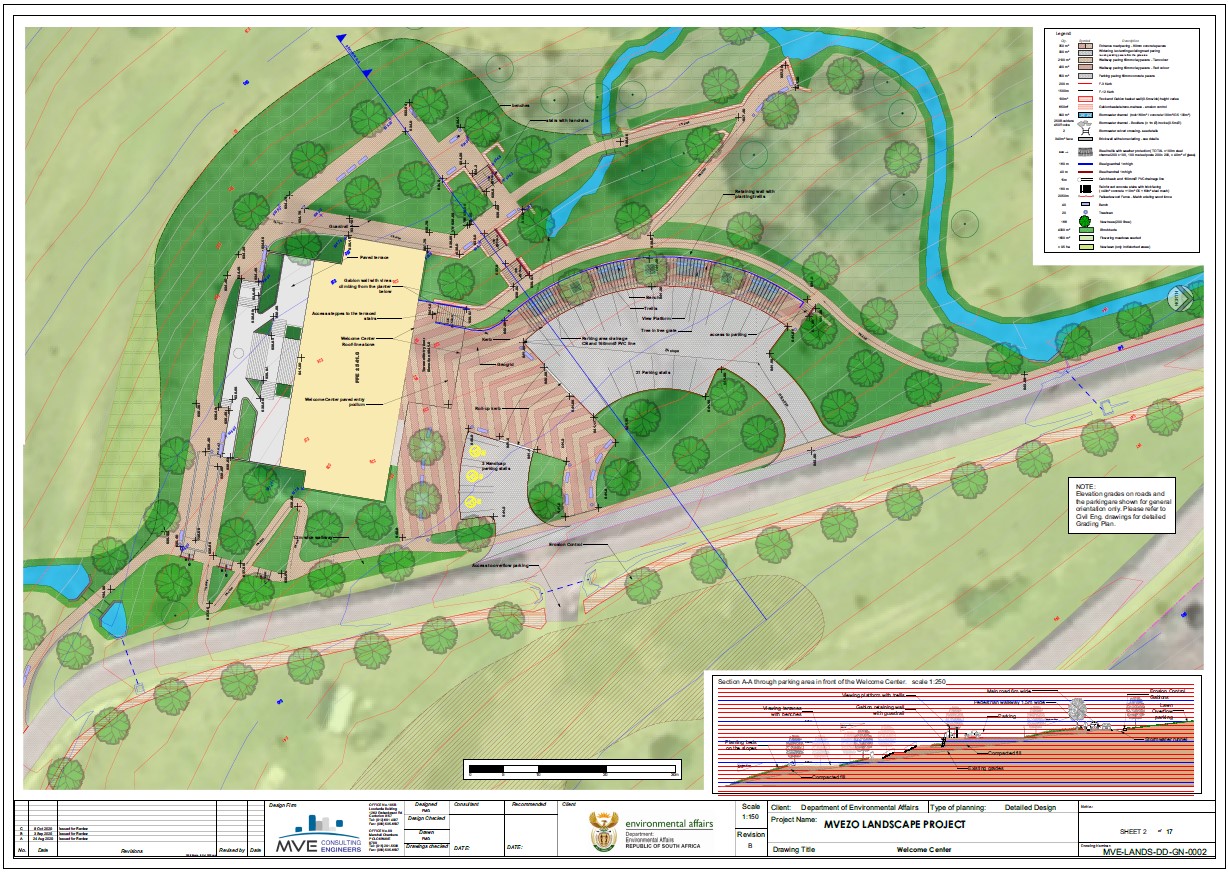 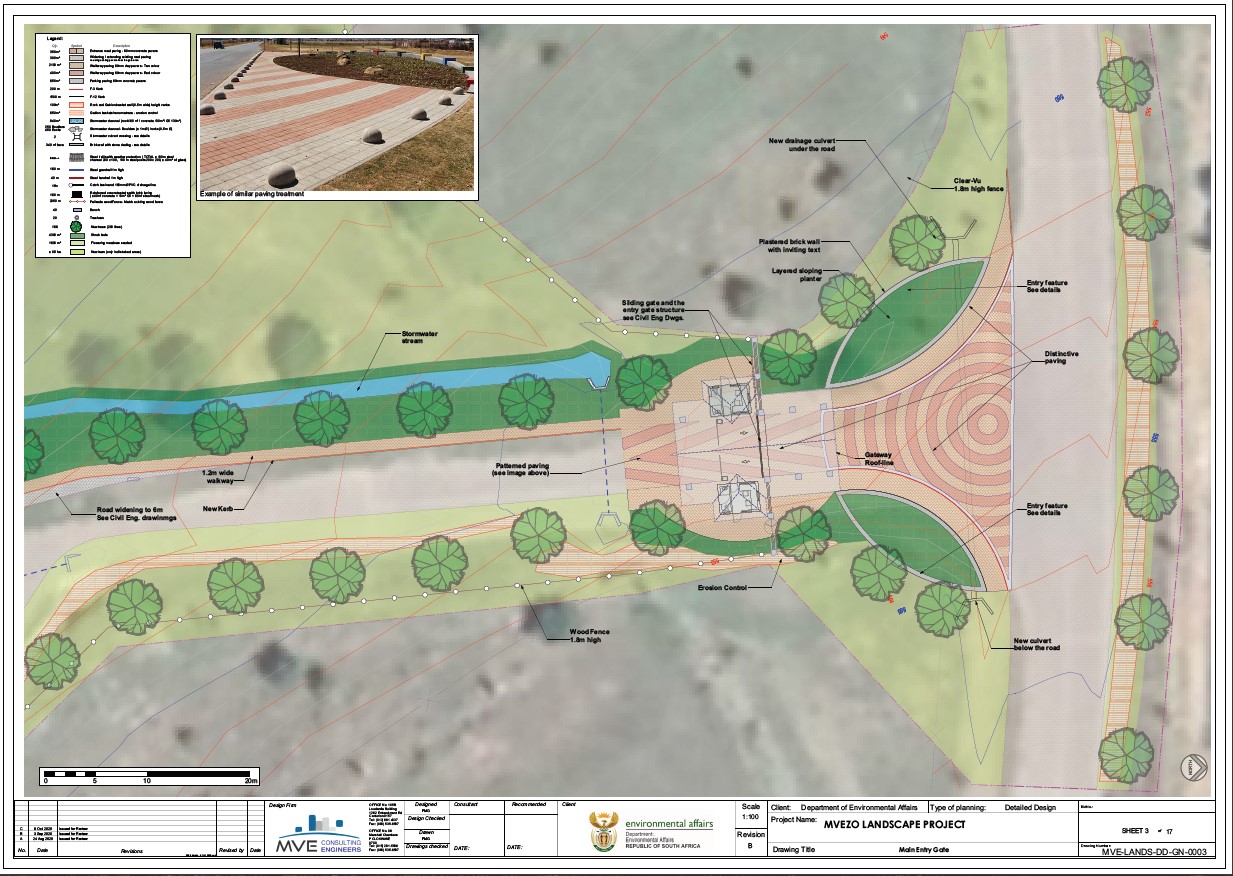 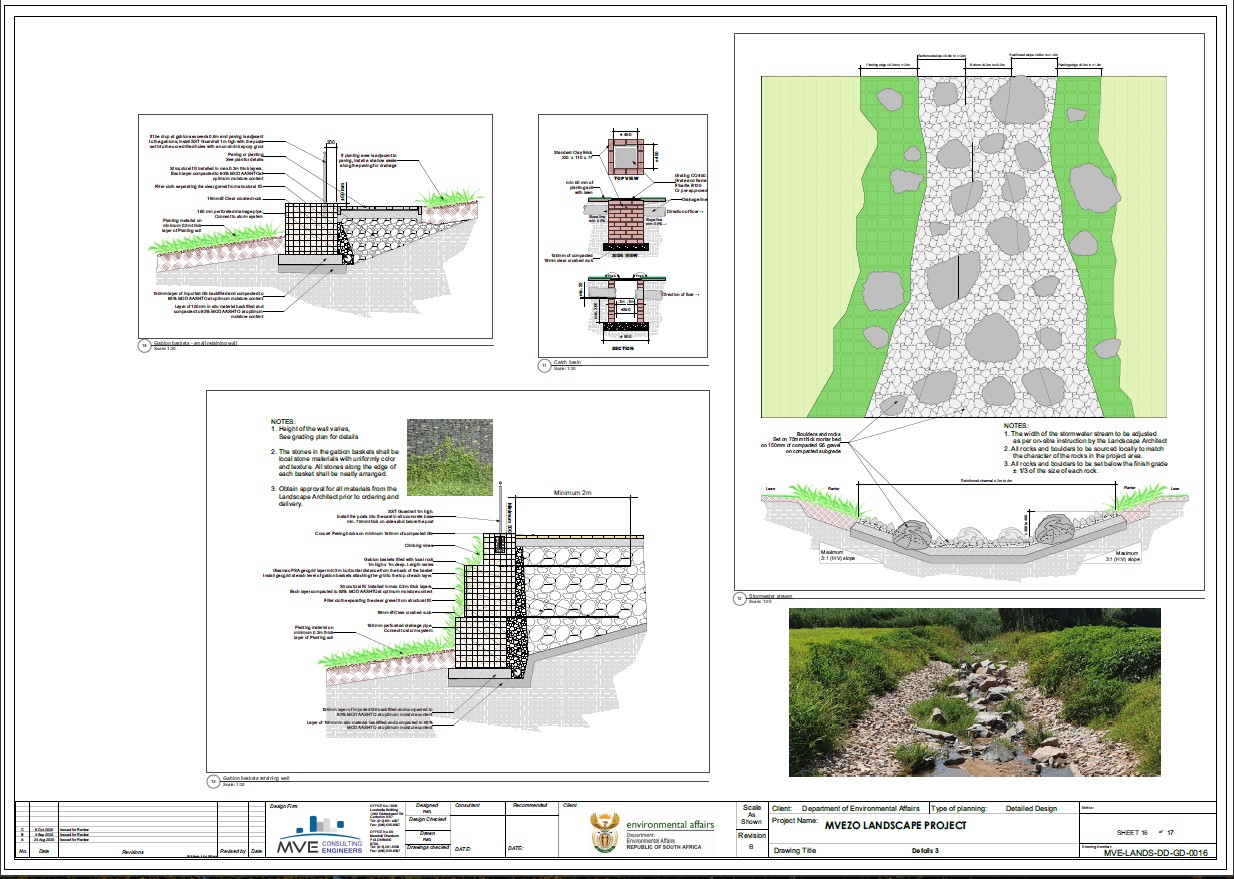 Horwood Farm Park, located within the Edenvale community, had been recently upgraded with a new set of recreation amenities and associated system of pathways. After the phase one work had been completed, Pawel Gradowski had been appointed to provide a landscape design for the overgrown and undeveloped portion of the park that included a series stagnant, polluted ponds and the river meandering between large, invasive trees. 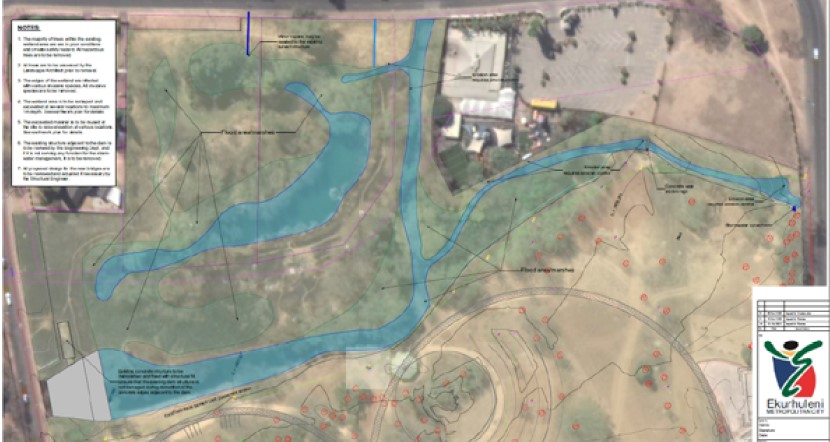 Pawel Gradowski provided the new landscape design that included the hydrological and environmental analysis of the area, and provided solutions that resulted in developing an attractive extension of the existing park.

The new design included:
• revisions to the shape of the river and creation of a large attenuation pond
• creative solutions for slowing down the flow of the river
• new measures for erosion control that protected the river banks
• a large constructed wetland
• a birds-sanctuary island
• three pedestrian bridges with a series of paved pathways that invite visitors to safely explore the natural section of this park. 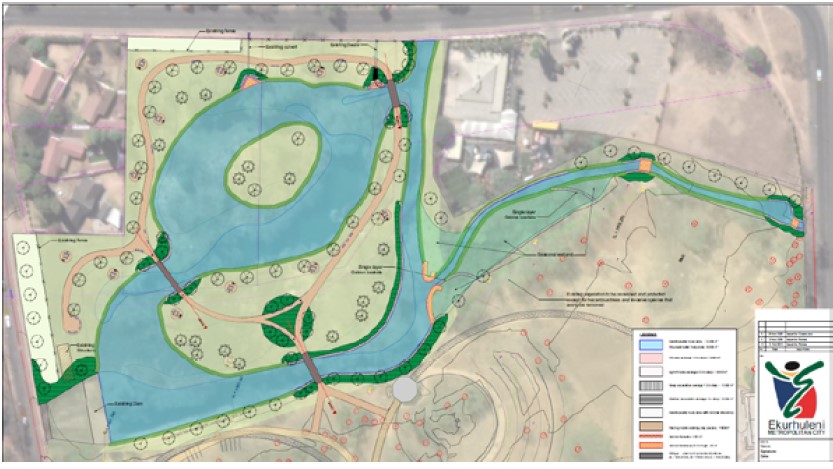 View of the lake restoration area during construction

The Matlala Park is located within the Kwa-Thema community. The upgrades to the previously completed phase of this project required landscape design for the development of three main components:

• Sport and recreation elements including a skate park, a large play field, a multipurpose sport basketball and tennis courts.
• Extension to the existing system of pathways,  including a new linkage of the park with the adjacent road via two, new pedestrian bridges over an existing stormwater channel.
• Cost-effective and practical solution to the significant pollution of the channel that was contaminated with raw sewage and trash. 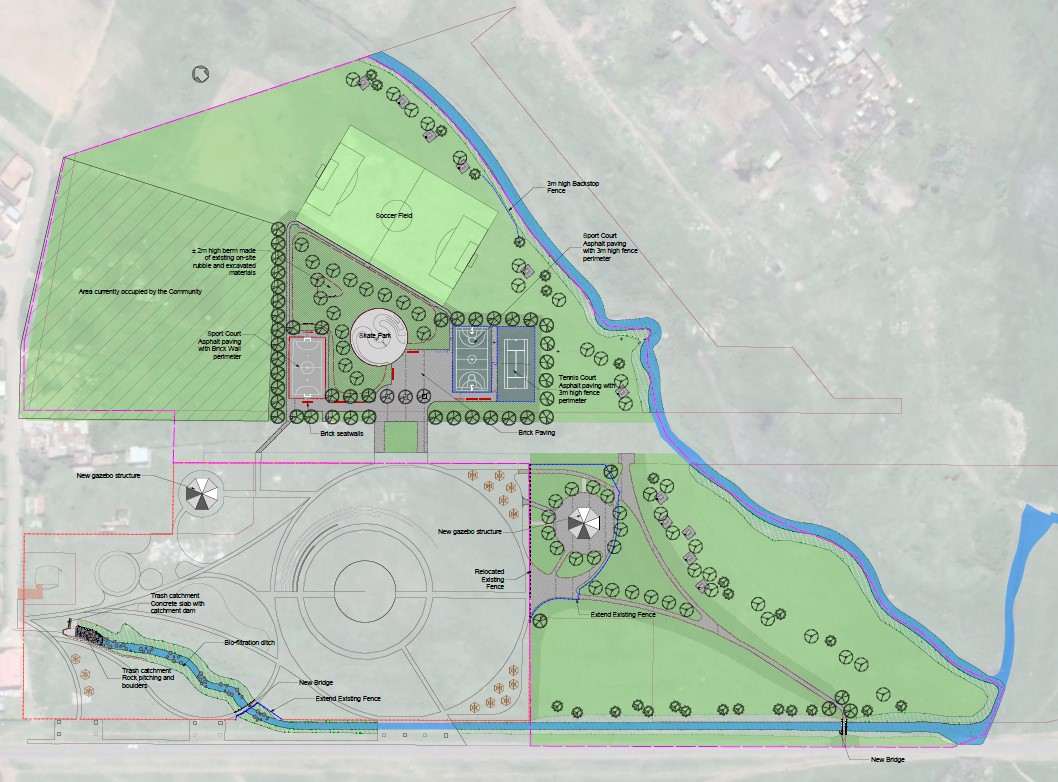 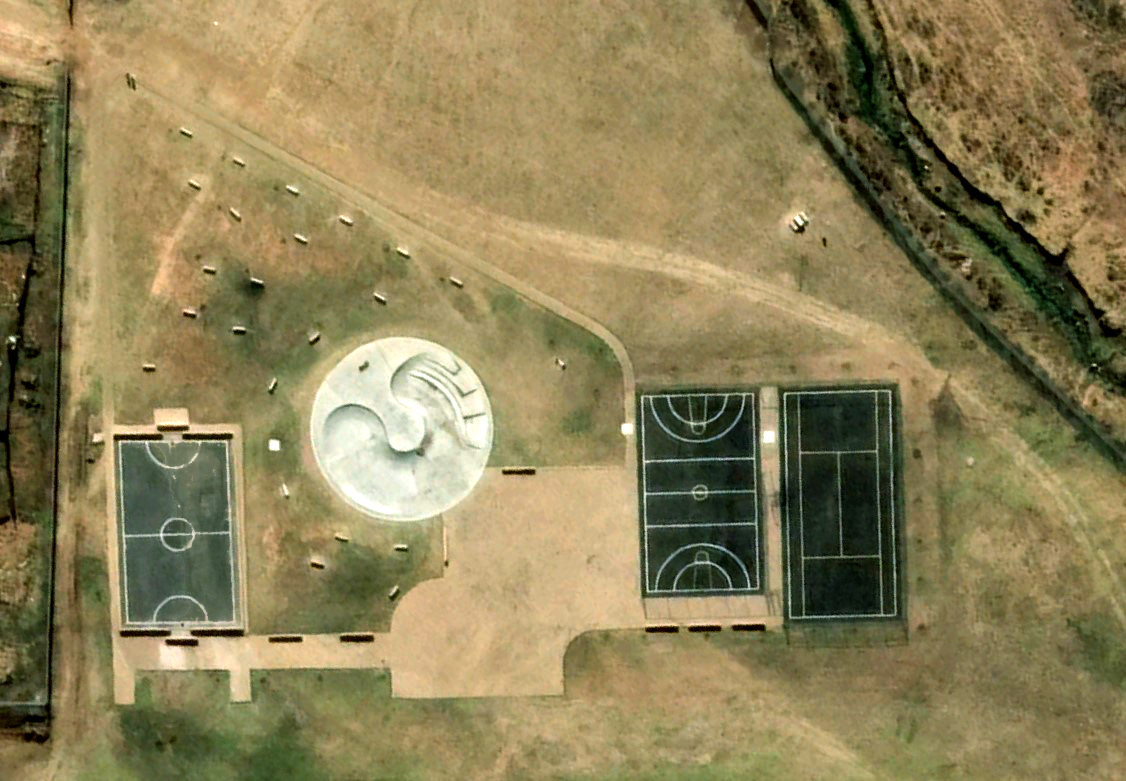 The Blesbok Park within the Tembisa neighbourhood has been developed within a large open space that encompasses a heavily polluted stormwater channel located between three low-income communities.

The two main objectives to the design were:
• to address the stormwater pollution of Blesbok stream that is flowing into the Jukskei river
• to provide a recreational facility for the neighbouring three communities.

The masterplan for the project developed by Pawel Gradowski working in tandem with Silverhorns Consulting, resolved these issues by providing landscape design that incorporated:
• trash catchment structures that capture debris flowing in to the stream from the adjacent streets
• an extensive bio-filtration system of plants along the reshaped stream banks that will reduce its flow rate and absorb several pollutants dissolved in the water
• playgrounds and various recreation amenities
• a network of trails and several pedestrian bridges linked the three  communities by providing easy access to all shared amenities and inviting visitors to engage in active recreation. 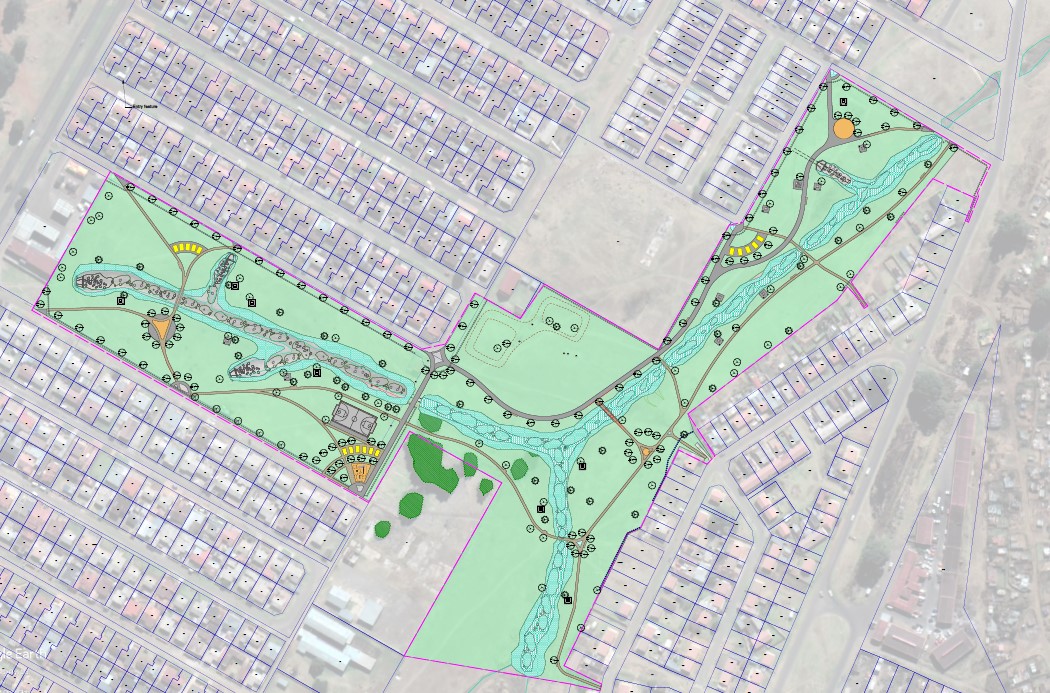 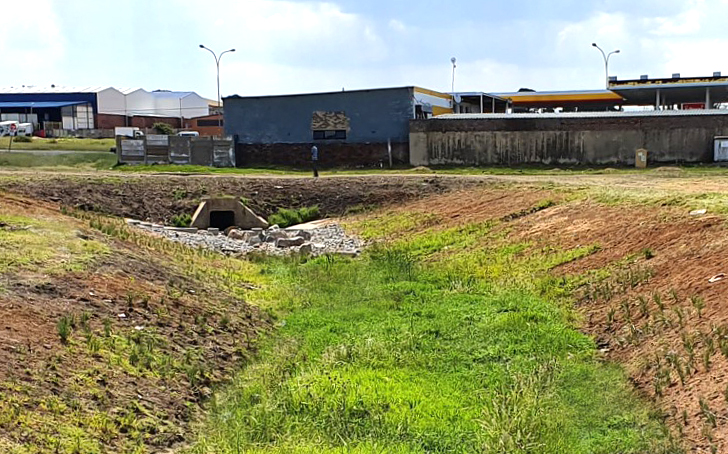 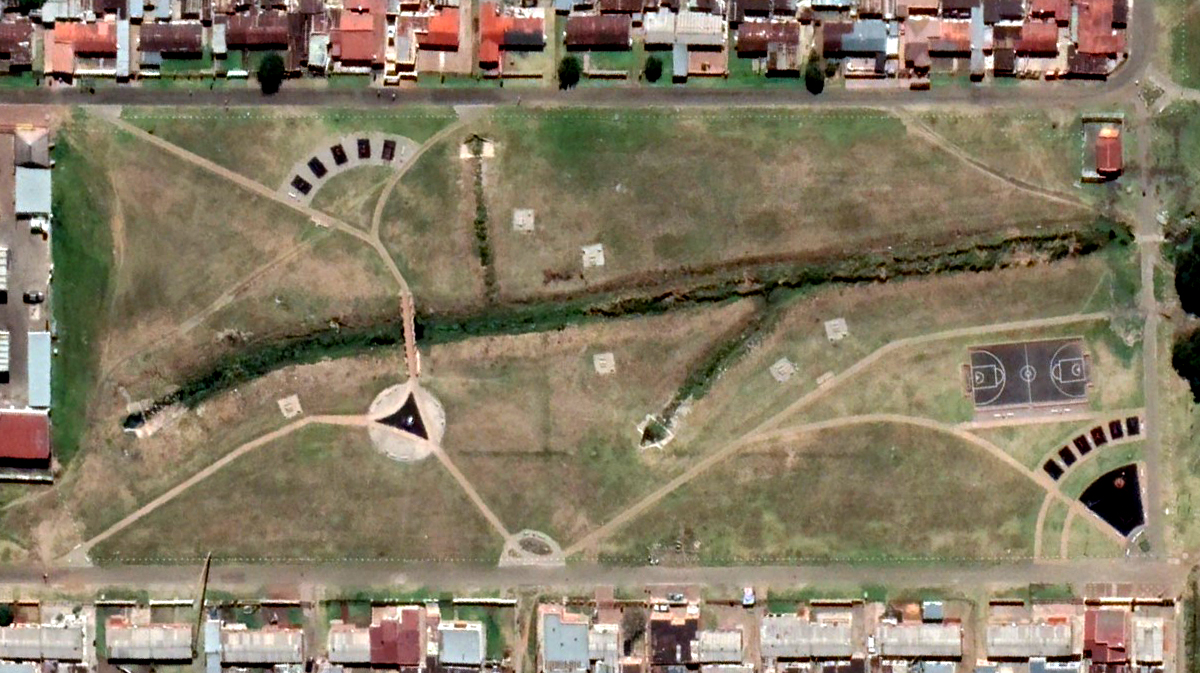 Elsburg Park, located at the edge of Cinderella Dam Lake, has been re-developed to protect the lake from polluted runoff flowing from the neighbourhood and to provide recreational amenity to the local residents and students from the adjacent school. In addition, a large portion of the park grounds was infested with alien invasive species that had to be removed. The
project was designed to be implemented in two phases.

The first phase had been completed in 2020 and included the following:
• removing of the invasive species
• removing concrete aprons from the existing drainage channels
• installation of innovative trash catchments structures
• planting the reshaped banks and floor of the channels with bio-filtration plant material
• installation of selected portions of pedestrian trails with picnic pads and benches throughout the park, which invites visitors to explore its grounds and promotes active recreation. 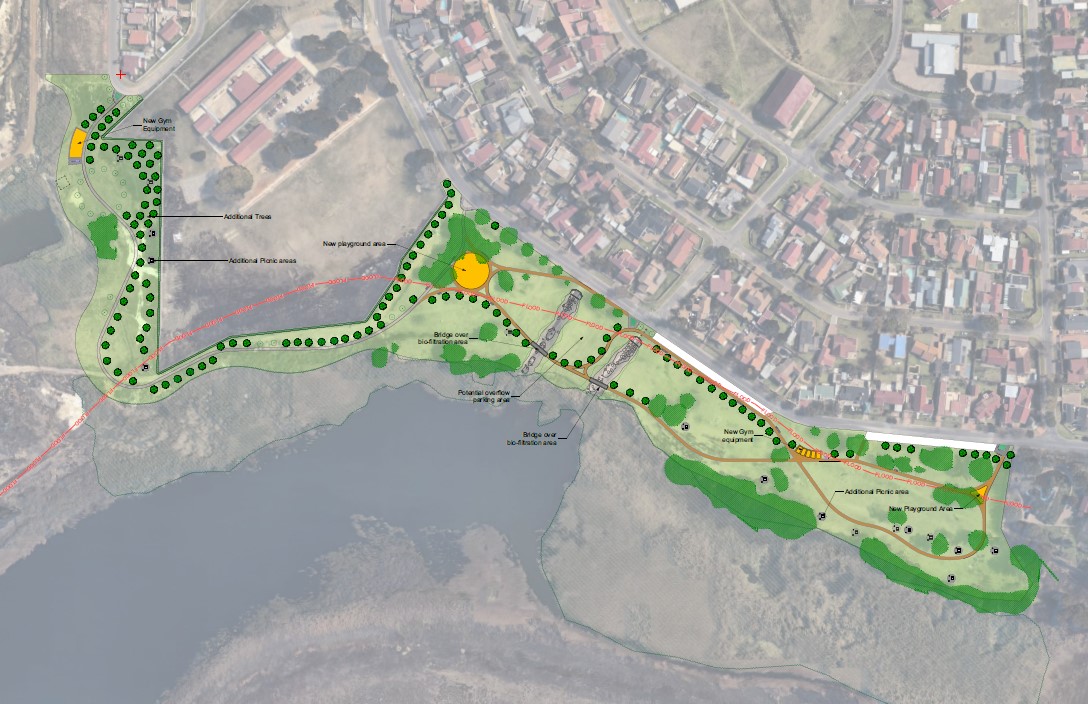 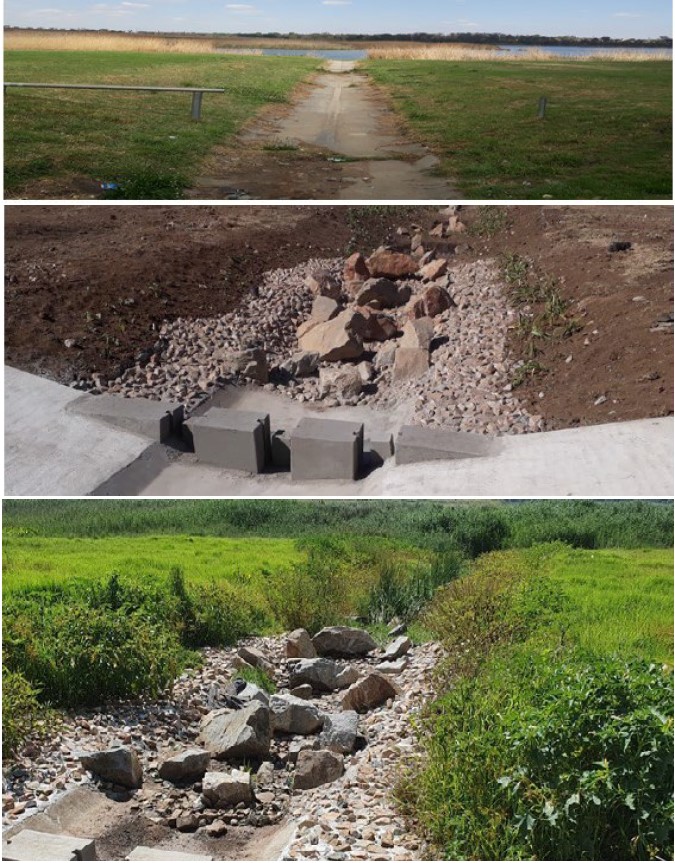